Hobas pipes carry the flow for the Trinity River Authority in their new 72″ diameter Jefferson Ave. Relief Tunnel. The two-mile long sanitary sewer line extends south from I-30 in Grand Prairie, Texas and provides badly needed additional capacity.
Challenging Design
Design and construction of the line presented many challenges. Because of the depth (mostly in excess of 70 ft.) and the alignment (beneath a military facility and an established residential neighborhood), tunneling was the only feasible installation method. The difficulty of this procedure was further increased because access shafts were limited to both ends and fully half of the distance is in radius curves. In addition to these items, project designers, Black & Veatch of Dallas, also faced durability, leakage control and structural design issues.
Limited Specification
In order to assure the structural performance, the allowed waterway carriers, Hobas pipes, RCP or cast-in-place concrete were required to carry all long-term loads without aid from the initial tunnel supports. Durability, inherent for Hobas pipe, was achieved for the concrete products by requiring a corrosion liner of PVC or HDPE. Specifications also limited leakage with a 125 inch-gallon infiltration test; easy for the no-leak Hobas gasket-sealed, bell-spigot joints.
Big Savings
Hobas pipes were selected by Oscar Renda Contracting of Roanoke, Texas, for several cost saving reasons. The high strength, much thinner pipe walls permitted the tunnel to be about one foot smaller. This resulted in fewer initial tunnel supports, over 20% less excavation and a smaller, less expensive bore head. Additionally, the lightweight (15% of RCP) Hobas pipe could be inserted the required long distance (5,000 ft.) much easier, faster and cheaper. Finally, all of the planned radius curves could be constructed using 20 ft. pipe sections because of the 1.25 degree joint angular deflection capability.
Successful Installation
Due to the many curves, the pipes were inserted individually, carried-in on a specially designed cart. This allowed rapid placement utilizing the same train engine that had been earlier used to power the muck cars. The pipes were belled in place with an electric jack and then were strategically blocked across each joint to the ceiling and sidewalls of the tunnel. The installation was completed by annular space grouting accomplished in two lifts due to the pipe’s high strength and stiffness. The finished pipeline is solid, leak-free and has little deflection; much to the pleasure and satisfaction of all involved.
Find Your Sales Rep 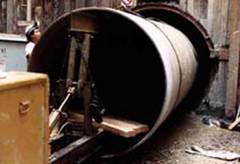 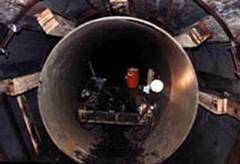