Hobas Under Live Runway
When the main water supply line at the McAllen, Texas, airport was rehabilitated using Hobas pipe, it brought new meaning to the phrase “slipline live.”

McAllen-Miller International Airport (MFE) is the primary business airport of deep South Texas and Northeast Mexico. To accommodate the future needs of the greater Rio Grande Valley, a master plan for future projects was developed. It is a federally mandated report that identifies building proposals, procedural initiatives, potential land acquisitions and other issues forecast for the airport over a 20-year period. Several projects have been underway at the expanding airport such as runway and taxiway improvements and a pipeline rehabilitation project.

A recently completed project included improvements to a water supply channel that traversed areas of Hidalgo County and parts of the airport. The irrigation water had been transported mainly in open ditches with pipelines at isolated crossings such as the one under runway 13/31. The line had been deteriorating for years. Small-scale repairs had been made; however, as the airport continued to grow, it was time to correct the problem for good.

Custom Solution
Titled the “Rehabilitation of Irrigation Pipeline,” the project was developed after aerial photography identified strips of lush vegetation along the pipe alignment, a clear indication of leakage. “From the beginning, Hobas partnered with the airport and HNTB Corporation to engineer a custom solution to the repair of this critical infrastructure,” said Hugh Weaver, Jr., P.E., associate vice president, director of aviation for HNTB, a national transportation infrastructure firm that designed the project. “As the primary feed for the city’s reservoir, the duration of the project was critical. Seventy Calendar days were allotted for completion.”

Summit Contracting, Ltd. of Weslaco, Texas, low bidder, had been performing paving projects at the airport and decided to broaden their horizons by entering the pipeline rehabilitation arena. Summit had never installed pipes in a sliplining application and had relatively little experience with underground work in general. Ben Salinas, vice president of Summit Contracting, was excited about breaking into underground work. “In the end, it was a very good job for us; we had a lot of assistance from the Hobas people as far as installation and technical support.”

The original water line consisted of four-foot segments of 72-inch diameter concrete pipe. Over the years, the pipeline was extended to accommodate runway-widening projects. Newer eight-foot sections of concrete pipe were installed on either end of the existing line. Summit, in rehabilitating the waterway, had to deal with these extensions as well as other irregularities of the pipeline. The existing line had several repaired areas where the inside diameter was no longer full sized. To compound the problems, several of the pipe joints had settled and moved over the years, causing offsets, points of intersection (PI) and further leaks.

Summit evaluated the line and devised a plan to install the new pipe. HNTB specified a 63-inch diameter, centrifugally cast, fiberglass reinforced, polymer mortar (CCFRPM) pipe, since it met both the hydraulic considerations and the clearance required by the installer. As luck would have it, the largest PI in the line was at about the midpoint under the active runway 13/31. The point could not be navigated with pipe sections and closing the runway was not an option. Consequently, Summit had to carry pipes in from either end. “We fabricated a buggy that we utilized to carry the pipes into the existing line,” stated Salinas. “The CCFRPM pipes were lightweight and easy to handle and join. The first segment placed, at the line midpoint, was a mitered fitting with an angle that corresponded exactly to the angle measured.” Subsequent pipes and mitered fittings were carried in from either end of the line until the entire 1,090 feet of line was rehabilitated. To facilitate the grouting plan, pipes were blocked in place as they were joined. “The actual pipe installation only took a couple of days.”

The vast majority of the construction was accomplished outside of the Object Free Area (OFA). Thus, the runway, service road and taxiway all stayed in operation during the pipe installation. Closure was necessary only to accommodate the gravity-grouting plan the contractor had proposed. Grout was inserted using four surface access points. Since these points traversed the airfield, the grouting crew worked at night. Hobas installed bushings in the pipes that allowed for constant monitoring of the grout progress.

Air Traffic Unaffected
“We had to close the runway only from 11 pm to 5 am on one evening. We were able to route all commercial air traffic so they had landed before the closing. There was a minimal amount of other traffic and I’m not aware of any problems that were caused by the closure,” stated Matt Lewis, operations and maintenance manager for McAllen-Miller International Airport.

The airport found benefits of the project that hadn’t been originally envisioned. “Prior to the pipe relining we had several pipe leaks. The leaks were severe enough to cause a marsh area adjacent to the runway. Now that the line has been sliplined, there are no leaks,” said Lewis. The marsh area created by the leaking pipeline has now completely dried up.

The pipeline was also extended from its previous length to move an existing headwall further from the runway, also allowing an access road to be relocated. With the heightened airport security regulations, the access road had been closer to the OFA than the airport officials and the Federal Aviation Administration (FAA) preferred.

Ahead of Schedule
“We really hadn’t done any significant pipe rehab prior to this one. We are very pleased with the results, especially since it is directly under one of our runways” commented Lewis.

“The project was a huge success and the City of McAllen received the repaired line a week ahead of schedule. We are confident that the success of the project keyed upon using the Hobas product. We were very satisfied with the product and the Hobas support team,” added Weaver.

The “Live Sliplining” took on a new meaning because air traffic on the surface continued with no major inconveniences while the old pipeline was rehabilitated.

Fred Segundo, assistant director of aviation, McAllen-Miller International Airport, summed up the cooperation that helped the project progress smoothly, “This was a team effort and various city and county departments helped. This included the City’s Public Utilities, Public Works and Engineering Departments. Water District’s number 2 and 3 helped with rerouting water to keep city’s south water plant and reservoir operational. The project was truly a team effort.”

The new structurally sound CCFRPM line is leak-free and will provide for many years of safe service. HNTB stated they would be likely to use the product again in McAllen and elsewhere. 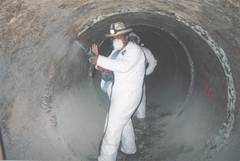 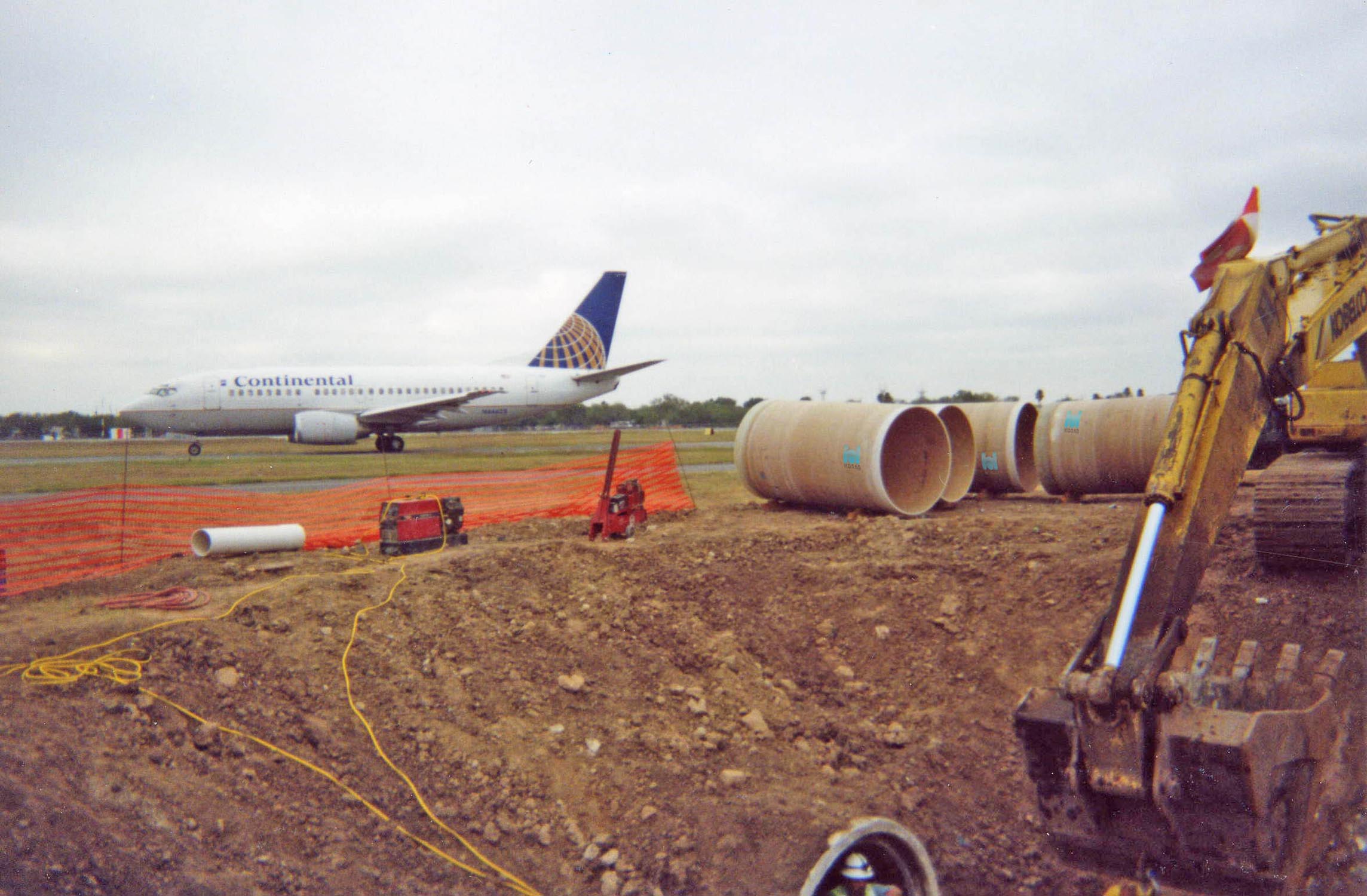 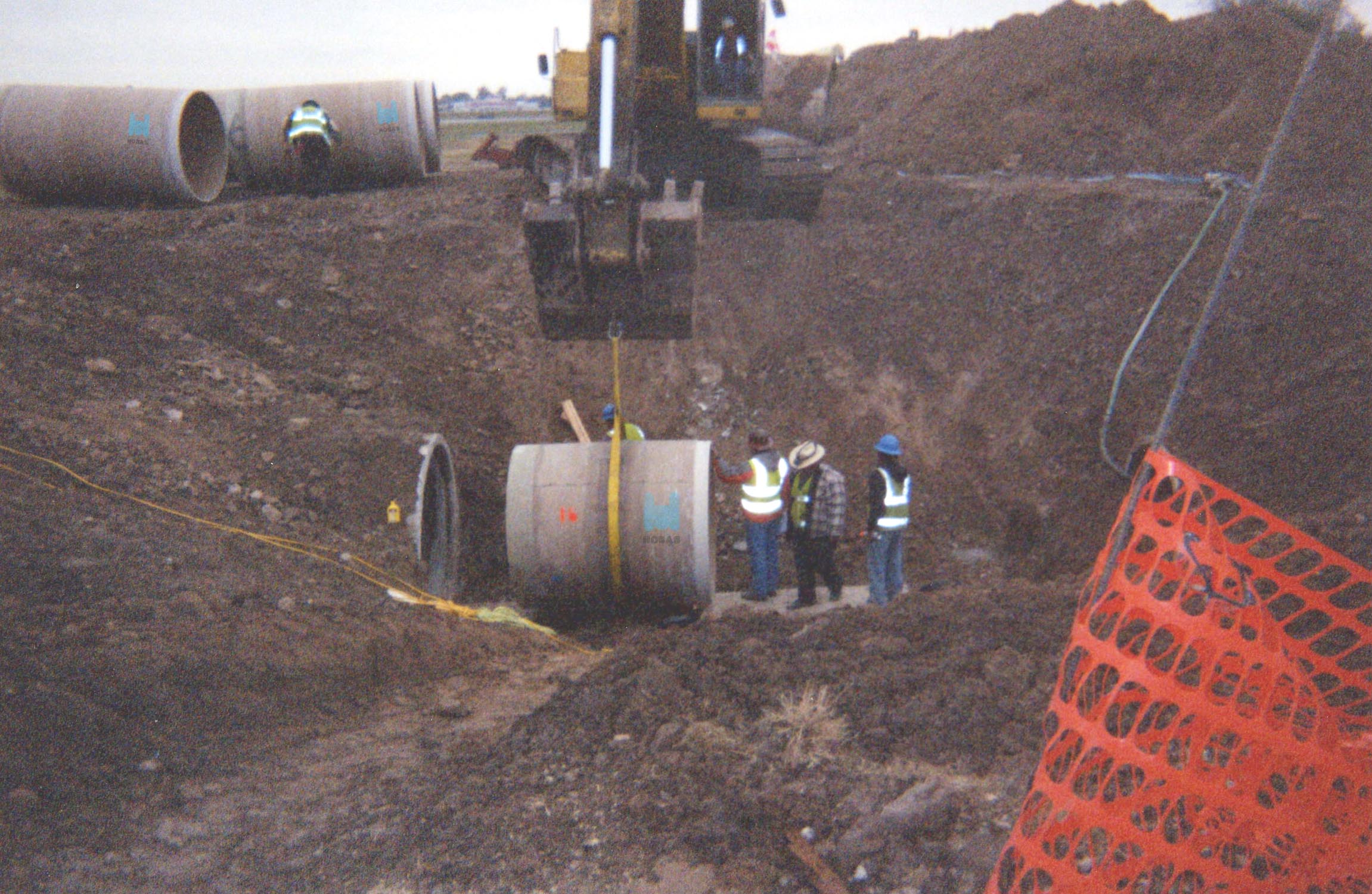