One of the most culturally diverse cities in the country, Albuquerque’s history can be seen in its architecture, artwork, cultural centers and cuisine. Countless customs and traditions passed down over generations are a vibrant part of daily life in the city, and make Albuquerque a center of authentic Southwestern culture. And the sun shines 310 days a year.

Albuquerque, N.M. has the same problem as many municipalities throughout the United States – old and failing interceptor sewer lines. However, most recently, the Albuquerque Bernalillo County Water Utility Authority (ABCWUA) took a proactive approach to address this problem rather than a reactive approach of waiting for a failure.

In the past, it had been common to respond to a sewer collapse, often on a Friday night, which required the isolation of the area, major traffic rerouting and, depending on the rehabilitation method, bypass pumping the sewer. When an emergency collapse of an interceptor sewer happens, the associated costs are usually a lot higher than a planned sewer rehabilitation project.

The ABCWUA took bids on a Large Diameter Sewer Rehabilitation Project for interceptor sewers. It was designed by AECOM, an international firm that has an office in Albuquerque. AUI, Inc. of Albuquerque was the successful bidder. AUI has extensive experience with many trenchless applications, so could determine the most economical methods and apply its sliplining experti

Sliplining was used first. Its benefits were apparent immediately. This job was relatively trouble-free, with easy insertion, even of this large diameter, with no bypass pumping required for insertion of the pipe that was specified. Since this is the main line into the treatment plant, the quantity of daily flows makes bypass difficult and costly. To show how easy the CCFRPM pipe is to handle, the same excavator that was used to handle the pipe was also utilized for the sliplining operations, Aside from a front-end loader onsite, the excavator was the only piece of heavy equipment needed for pipe installation.

On past Albuquerque jobs, CCFRPM has been used because it’s a thin-wall high-strength pipe that can maintain the flow capacity of the existing line. Even in the case of a diameter step-down in sliplining, a pipe with a high flow capacity (low Manning’s value) provides the greatest recovery. Kim Paggioli, P.E. of Hobas Pipe USA, said, “Previous data reported back to us for sliplining installation show that a 0.10 Manning’s value is very reasonable to expect post rehab.”

The biggest interceptor to be rehabilitated totaled of 5,234 linear feet of 78-inch RCP, which was sliplined with 66-inch diameter CCFRPM pipe. One of the most difficult jobs in this slipline process was to clean and remove all the silt from inside the old sewer pipe. AUI subcontracted the cleaning operation to Southwest Sewer Service Inc. of Los Lunas, N.M. They removed more than 1,500 tons of debris that has been lying in the old 78-inch line and hauled it to the sewer plant. All of the slipline work was done under live conditions without the need for bypass pumping.

The 1,210-linear foot 54-inch sewer interceptor line was rehabilitated with a 48-inch sliplining pipe. This section was located in downtown Albuquerque, so vehicle traffic, pedestrians and business owners were all stakeholders in the construction process. Under the direction of ABCWUA’s project manager, Nancy Musinski, P.E., the work downtown went smoothly and was completed in less than a month.

The 48-inch sewer interceptor, 2,209 feet long, was sliplined with 42-inch pipe. This section was originally installed in 1966 and the closed-circuit television (CCTV) inspection before the work began revealed an extremely deteriorated condition with exposed aggregate and hanging gaskets. The sewer line ran through the City of Albuquerque’s Solid Waste Yard. One segment actually ran under a service building, so open cut was not an option.

The CCTV inspection of one of the segments revealed three active sewer service lines, which were connected at depths of up to 18 feet.

During the course of the installation, a group of ABCWUA employees assembled on site to watch a demonstration of Hobas CCFRPM pipe being installed by sliplining. They were joined by representatives of AUI, Hobas and others involved in the construction from the general contractor to various subs. In addition to sliplining, the project used another trenchless rehabilitation method, cured in place pipe (CIPP).

CIPP
Cured in place pipe was used to rehabilitate some RCP lines. Unlike the CCFRPM pipe, which required no bypass pumping, this 48-inch sewer line was 100 percent bypassed with back up pumps in order to allow the CIPP process to proceed. The 48-inch sewer line snaked through backyards of residences and businesses. One manhole was located on a homeowner’s property.
Summary
The successful trenchless methods used to rehabilitate Albuquerque’s aging interceptor sewer lines included more than 18,000 linear feet of both sliplining and CIPP. Today, the project is complete, the lines are grouted, connections made and it is providing trouble-free service.
Find Your Sales Rep 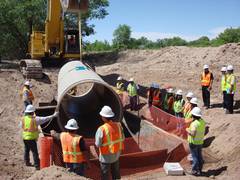 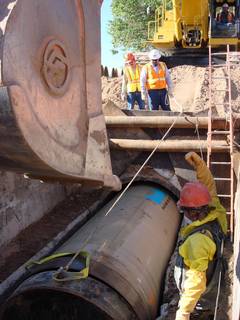 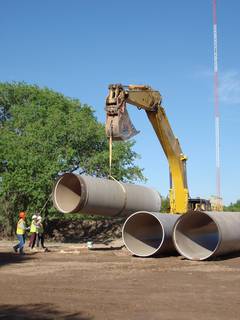