Long a favored product for microtunneled sanitary sewer interceptors nationwide, now installation of Hobas centrifugal cast fiberglass reinforced polymer mortar (CCFRPM) pressure pipes by jacking is also becoming commonplace. A near flawless installation was completed in Honolulu on the Hart Street Wastewater Pump Station Force Main Replacement project. The new line included 2200 feet of 48” Hobas pressure jacking pipes and over a dozen custom designed fittings.
Critical Application
The original Hart Street force main, a 50 year old steel line, served about one-third of the Honolulu area population. Several breaks made replacement a priority, but the job was not simple. The alignment crosses under the Honolulu harbor, the area’s busiest port docks and a major coastal highway. Facing these challenges, an all trenchless installation was planned. First, twin 36-inch HDPE pipes, each 3200 feet long, were placed under the harbor using directional drilling. Then, so grade could be controlled, the 48-inch Hobas CCFRPM pipes were microtunneled under the port docks and the highway to reach the main interceptor.
Limited Specification
Project designers, Wilson Okamoto & Associates of Honolulu, specified only two products for the microtunneled pipes, concrete steel cylinder and CCFRPM. The choice was limited because of the severity of the application and installation. First, the pipes had to be both strong enough for jacking and capable of pressure service. Second, considering the seawater external environment and raw sanitary sewer flows inside, corrosion resistance was also important. Finally, reliability was paramount because of the difficulty of future access, depths up to 35 feet and the critical nature of the application.
Flawless Jacking
General Contractor, Modern Continental of Boston, chose Hobas pipes as the most economical and reliable option. The microtunneling was completed in four drives, two long and two short. The Hobas pipes performed flawlessly in jacking with no breaks and maximum loads of only 200 tons even on the 1000 foot push. One interjack station was inserted on each of the long drives, but neither was ever activated. Modern attributed the low loads to the mostly coral soils and the true OD dimensions of the Hobas pipes. To minimize change overs, 19 foot sections were utilized and 2-inch stainless steel bushings were provided for lubrication/grout ports.
Versatile Fittings
Hobas fabricated a variety of FRP fittings to match the required alignment. A 48” X 48” bifurcation, reducers to 36” and several 36” elbows were delivered to transition from the two 36” HDPE lines to the single 48” Hobas portion. Flanges and a 48” X 48” wye permitted assembly to two valves and a lateral. Lastly, odd angle 48” elbows at three shafts connected the jacking runs. Accurate detailing and fabrication of the various fittings facilitated an easy, precision “fit-up” in these complex areas. Modern used dresser style couplings as closure joints and for the connections to the HDPE pipes.
Final Success
The completed system easily passed the installed 100 psi field hydrotest with no leaks or breaks in any of the pipe or gasket-sealed jacking points. The project proceeded so trouble-free that it was completed four months ahead of schedule and under budget. With an aging sewer infrastructure, Honolulu expects more applications for Hobas pipes in the future.
Find Your Sales Rep 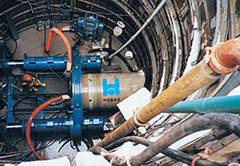