Meandering through the White Mountains, a large wooden penstock served as the main water supply for a local hydro facility called Jackman Station. It’s fed by the Franklin Pierce Reservoir, which was created by the hydro’s dam and surrounding earthen dikes. The water elevation in the reservoir is managed according to spring run-off.

Public Service of New Hampshire (PSNH), the Granite State’s largest electric utility, serves more than 475,000 homes and businesses. PSNH’s power generation facilities consist of nine hydroelectric plants, including the Jackman Hydro station, which was built in 1926. This facility, located in Hillsborough, has been serving the area for years, but the penstock was approaching the end of its service life.

Prior to the recent improvements, 5,000 feet of wood stave penstock extended from the Franklin Pierce reservoir to a surge tank upstream of the powerhouse. This 7.5-foot diameter penstock was made up of vintage wood stave sections, circa 1926. Repairs were undertaken in 1954 and in the 1970’s, yet the downstream sections of the wood penstock still leaked badly. This leakage caused icing problems during winter months and required constant maintenance. In 2003, the penstock had a significant rupture that impacted abutting properties. To prevent future failures and ensure reliable operations of the hydro facility, repairs to the existing penstock were necessary. In a series of contracts, PSNH decided to replace the remaining wood stave penstock with a new pipeline.

“The corrosion resistance and relative stiffness of FRP pipe meant it could be supported on the existing grade and half buried, rather than placed on saddles or completely covered in a buried trench. This design flexibility, combined with a longer projected service life, lead to a competitive total construction cost for the FRP alternative,” said Keith Martin, a project engineer and civil/structural engineer with Kleinschmidt’s Pittsfield, Maine, office.

“The lower frictional resistance of Hobas compared to other materials allowed the replacement pipe to be reduced to a 7-foot diameter without additional head loss,” explained Martin.

The pipe was half buried in the shallow trench of the existing penstock, requiring minimal excavation costs and low environmental disturbance. Approximately 300 feet of the new penstock were supported above ground on steel saddles to accommodate the topography as well as minimizing the impact to the wetlands that the penstock crossed.

“Hobas CCFRPM is manufactured by a unique computer controlled centrifugal casting process. To achieve the higher axial strength necessary for the aboveground installation, additional reinforcement is placed in the longitudinal direction during the manufacturing process,” explained Rene Garcia, Sr. engineering associate with Hobas Pipe’s Houston manufacturing facility. The design flexibility is just one of the benefits provided by this product.

“PSNH bought the Hobas pipe directly and CCB, Inc. of Westbrook, Maine (CCB) was contracted to install it,” said Newell Porter, project manager with CCB. “Prior to this project, I had heard of Hobas pipe but had never installed it.”

The job site posed some challenges as the pipe was installed in a remote area. “The pipe arrived as scheduled and was unloaded near the roadside. This phase of the job was 1,020 feet of 84-inch diameter Hobas pipe. The individual joints were then carried to the point of installation with an excavator. We had no truck access to the installation point. A Hobas field rep was onsite pretty much from day one. The first part of the installation was through a curve where 10-foot joint sections were connected and then deflected to make up the curve,” said Porter.

The Hobas FWC coupling joint utilized on this project is a pressure joint. It is commonly used in direct bury application and for above ground installations such as penstocks. It is a structural filament wound sleeve overwrapped and mechanically locked to an internal full-faced elastomeric membrane. The sealing design includes both lip and compression elements so the joint is suitable for both non-pressure and pressure service up to 250 psi. “In our case, we air tested each joint after assembly with a 10 psi air test. None of the joints leaked. Once the line was in operation, we were required to visually inspect each and every joint for a sign of leakage and there was none,” said Porter.

JML Trucking and Excavating of Errol, N.H., was the installation sub-contractor for CCB. Butch Lane echoed the general contractor’s sentiments, “It really is a good pipe. The joints are really tight. I know that we’ve had people come by and look at the project, and they are all happy. We were able to put PSNH online two weeks ahead of schedule and that makes them happy.”

“At the end of the project, it was found to be approximately seven times cheaper per foot to utilize the fiberglass pipe option partially backfilling the penstock than to support it above ground,” summarized Martin. Hydraulic advantages and longevity of the line will also provide life long savings.

Hobas pipes have been utilized in above ground applications in the USA since 1989 and worldwide for penstock applications for over 20 years. 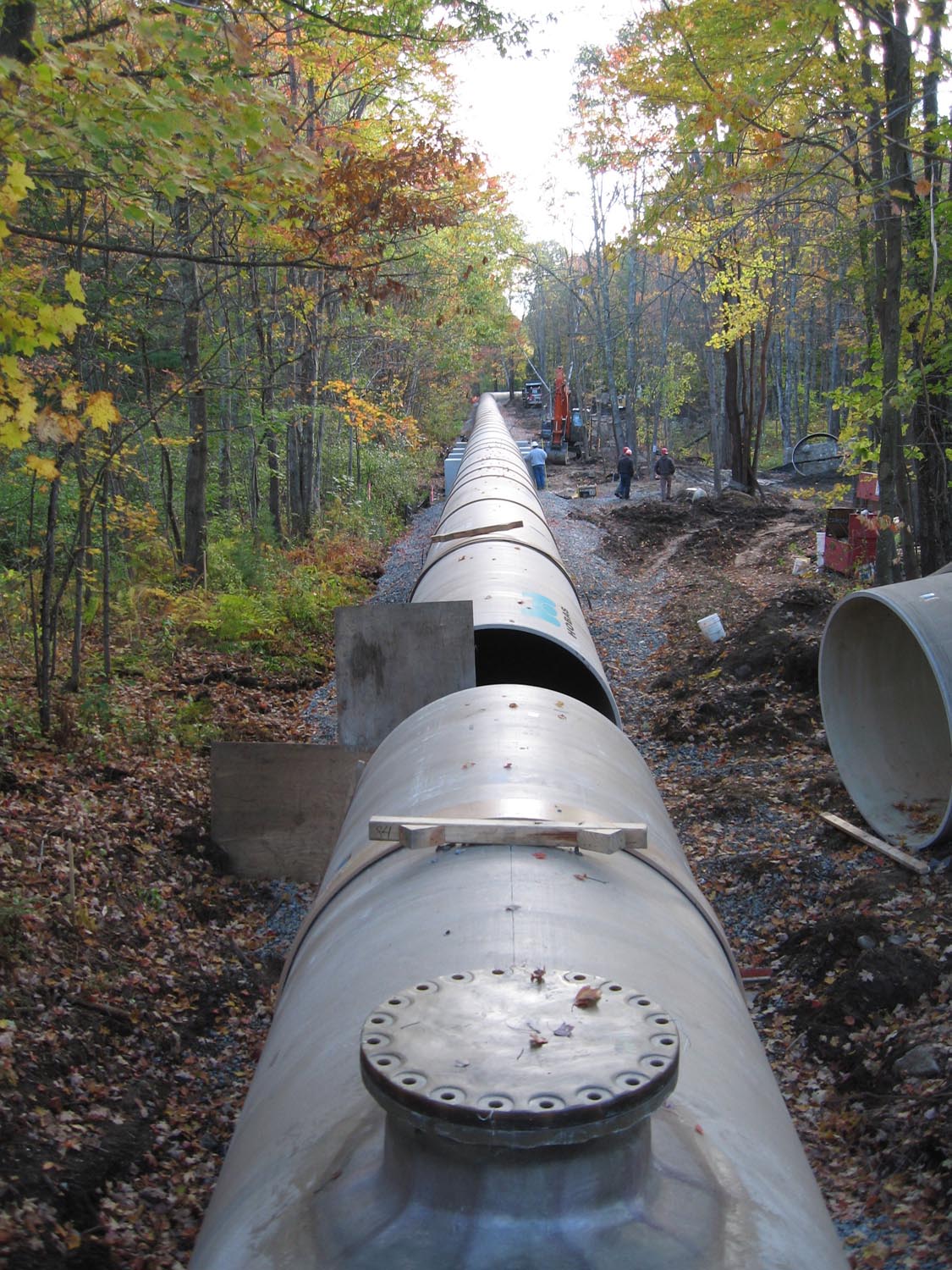 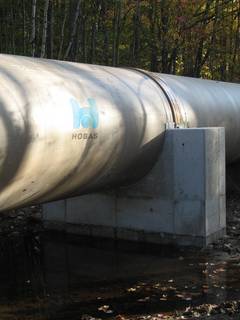