The Metropolitan Water Reclamation District of Greater Chicago (District) is a regional wastewater agency responsible for serving an area of about 875 square miles in Cook County, Illinois. The District collects, treats and disposes the wastewater from 168 independently owned and operated local sewer systems. The District owns and operates approximately 535 miles of intercepting sewers, which range in size up to 27 feet. The present worth of the intercepting sewer system is estimated to be more than $4 billion.

The District has developed a program for the inspection and preventive maintenance of the aging, intercepting sewer system to increase its reliability. The inspection program is designed to determine the maintenance and rehabilitation needs. It consists of physical inspection of manholes and sewer routes, closed circuit television inspection to evaluate the inside condition of the pipe and infrared inspection for locating the cavities and voids.

Evanston, Illinois, part of Chicago’s affluent North Shore region and home to Northwestern University, is directly north of the windy city and shares many common attributes including its Lake Michigan waterfront. It was also the site of the longest, large diameter sliplining project on record for the District.

One project of the District’s Evanston Intercepting Sewer Rehabilitation program, the Lake Street sewer rehab project, included 7,000 linear feet of 120-inch semi-elliptic cast-in-place concrete sewer. “A closedcircuit television inspection of the sewer conducted by the District revealed that the concrete sewer pipe had cracked at a number of places and had lime deposits at cracks and ‘cold’ joints and the concrete had eroded due to the action of hydrogen sulfide and flowing water. In order to restore hydraulic and structural integrity, the sewer needed to be rehabilitated,” stated Amreek Paintal, engineer of sewer design at the District.

Bid documents for the project included various options: segmental sliplining, cured in place (CIPP) lining and insertion of panels. Kenny Construction of Northbrook, Illinois, submitted the bid with the intent to slipline the sewer. The job was awarded to them based on rehabilitation by sliplining with Hobas centrifugally cast, fiberglass reinforced, polymer mortar (CCFRPM) pipe.

Jack Callahan, vice president of the underground group with Kenny, said, “We thought it would be the most economical option due to timing and the size. We do a lot of CIPP, but this was a little too large for that method, considering the water situation, the bypass pumping that would have been required and everything else. It would have been more difficult and expensive.”

Paintal offered insight into the design process, “The design of the sewer lining was based on several conditions and parameters. The existing sewer was considered to be in a fully deteriorated state. Loading due to overburden and hydrostatic conditions was evaluated, and the liner needed the ability to withstand the corrosive environment.”

Rehabilitation projects have many goals: reestablishing the structural integrity of the pipe, preventing leaking joints and providing a corrosion resistant liner – all while maintaining flow. “Capacity preservation is often critical on rehabilitation projects and thin-walled Hobas CCFRPM pipe very often provides increased flow capacity because of its superior hydraulics compared to the existing sewer. Even a downsize in diameter can easily be offset by the flow factors,” explained Kimberly Paggioli, P.E., vp marketing and quality control, Hobas Pipe USA.

Versatile Pipe
As with many projects, there were obstacles to overcome. The size and alignment of the sewer presented challenges, but nothing that couldn’t be conquered. “We have a lot of experience in rehab and have tackled some pretty tough projects. Sliplining pipe of this size is not like sliplining with smaller sizes. This was an uncommon project, the first time it was done. The project went well and we made good production putting the pipe in. The slipline method of installation with Hobas pipe is really a pretty slick operation,” said Tom Gillis, project superintendent with Kenny.

Hobas reported that this job is the largest diameter slipline of this length they have a record of. Prior to this one, there were two 110-inch diameter slipline jobs in Milwaukee, Wisconsin. One sliplined 1,000 feet and the other 2,000 feet, but Evanston appears to be a record.

The sewer line under contract had a semi-elliptical cross section of approximately 10 feet by 10 feet. Kenny bid the project planning to rehabilitate all 7,000 linear feet with 110-inch diameter pipe. Upon closer analysis of the existing sewer, they found that a reduction in liner diameter in several locations was necessary because the existing sewer was not round or straight and had many old repairs. Most of the sliplining pipe was in the standard Hobas 20-foot length, but a small number of 10-foot sections were supplied for places where they were necessary.

Maximizing ID
“The first 2,000 linear feet of sliplining had been completed using Hobas 110-inch flush reline pipe, which has an O.D. of 114-inches. Conditions we discovered when the job was started prompted a revaluation of the original design and resulted in the installation of 104-inch Hobas pipe with an O.D. of 108-inches to be used for the remainder of the rehabilitation work,” said Gillis.

“Hobas has over two-dozen different diameter pipe molds and can even custom fabricate pipes to a specific diameter for a particular project. The availability of various diameters and the flexibility in manufacturing provides benefits such as proper clearance to the installation contractor and maximum flow recovery to the municipality,” said Paggioli. Hobas delivered a flush joint sliplining pipe that had precisely the same diameter at the pipe barrel and the bell joint; this also facilitated installation. Most sliplining projects are located in congested areas with limited access to the line. In this case, that was so true that immediately accessible pipe storage was not possible. Metro provided a staging area about 1.5 miles from the site where 2,000 linear feet of 110-inch diameter sliplining pipe could be stored. It was shipped from the Hobas factory in Houston, Texas, to the staging area and then Kenny trucked it to the pit as needed. “We opted to get the first run of pipe on the ground before we started,” said Gillis.

Hobas customer service assisted Kenny in coordinating deliveries during installation. Gillis said, “We had a lot of conversations with the Hobas shipping department. Rick Turkopp, Hobas vice president of engineering, and the salesman came out several times, they were all very helpful.” Hobas provides responsive customer service and on-site field reps backed by extensive engineering support on all projects they supply.

Shaft Eliminated
“Initially we thought we would need three installation shafts, but we were able to do this with just two shafts because the pushing went so easily with the Hobas pipe. Access to the sewer was limited because of the five to 26-foot cover depth under the existing infrastructure, including roads and a railway,” said Callahan. The installation lines were quite long for pipe of such large diameter, so the pushing force required to install the pipe could be high if the friction wasn’t controlled. To decrease the friction, it must be kept as neutrally buoyant as possible. Gillis said, “The only issue with installing was to control the water to the level that would make the pipe neutrally buoyant. Once we figured that out, we had no problem. Typically, we had 15 to 18 inches of flow, and we calculated that including the weight of the pipe, its contents and everything else, we needed 27 inches of water outside the sliplining pipe to make it neutrally buoyant. We made some modifications and the pipe stayed buoyant.

“The two insertion shafts that were necessary were approximately 35 feet each. The Akkerman SL50-100 hydraulic jacking machine with a 60-ton pushing capacity is the specialized equipment that was used to push the slipline pipe. It can operate while the sewer is flowing.”

Kenny Construction worked to find the best option for the grouting, which included several grout lifts in stages to prevent uplift. “The grouting wasn’t as simple as it would be on smaller diameter projects since surface access was limited. Because this is an interceptor that is sensitive to rain, if you’re got a six- or seven-foot bulkhead in the sewer and rain comes, that sewer is ineffective,” stated Gillis. Although the grouting took some critical thinking, the pipe has high stiffness and has been performing well. Unique Product Large diameter sliplining projects can be complicated and this project posed challenges that were all successfully overcome. Hobas manufacturers a unique product that meets the requirements of large diameter sliplining: smooth OD, hydraulic capacity, high axial compressive strength and multiple diameters including many in-between sizes.

“If the length and diameters are within our capability, we certainly would slipline with Hobas again,” said Callahan. 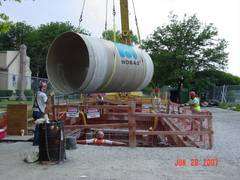 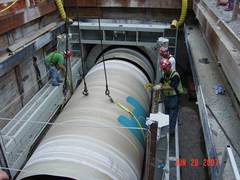 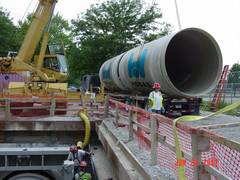