The Delgany Common Interceptor, which follows the banks of the South Platte River in Denver, Colorado, was in need of repair. The proposed work included removal of the top half of the existing aboveground brick lined sewer to accommodate the installation of approximately 1,600 linear feet of new 72 inch diameter pipe between I-70 and 50th Avenue.
Contractor’s Choice
Trainor Construction Company of Golden, CO chose to install Hobas fiberglass pipes, due to their many cost saving advantages, in lieu of the specified alternate of reinforced concrete pipe. Reported factors which influenced Trainor’s decision included the light weight of the fiberglass pipe (typical Class 1 concrete weights six to eight times more than Hobas pipes in this diameter). Using RCP would have required heavier lifting equipment, which would have been very difficult to maneuver in the project area due to the presence of overhead power lines. Another benefit of using Hobas pipe was its high strength pipe wall (compressive strength of 2.5 times greater than typical concrete) which allowed Hobas pipes to achieve the required performance with a much thinner wall. This resulted in significantly smaller OD’s, for Hobas pipes compared to RCP, while still maintaining an oversized inside diameter. On this project, the contractor would have needed to remove the existing brick lining in order to fit the 72 inch diameter concrete pipes into the remaining cradle. The Hobas option did not require this task. Because of all of the installation savings, Trainor chose Hobas.
Superior Performance
Project designers, Metro Wastewater Reclamation District — Engineering Department and Burns & McDonnell Engineering Company, were concerned about the potential for future corrosion of the interceptor and required the concrete pipe alternates to have sacrificial concrete (AZ design) along the entire alignment and PVC lining in some areas. The highly corrosion resistant Hobas pipes required no additional linings or coatings to provide the required corrosion protection. Other benefits of using the Hobas pipes for this job were the leak-free, gasket-sealed FWC coupling joints and the non-porous pipe wall. Each joint was tested per the specifications to 3.5 psi and every joint passed without any problems.
Joint Versatility
The existing pipeline included a 750 foot long curve with a total deflection angle of nearly 47 degrees. By utilizing 10 foot pipe sections, and deflecting the FWC coupling joints, the curve was successfully relined without any mitered or beveled fittings. Also purchased by Trainor were Hobas tee-base manholes which were likewise supplied with the gasket-sealed FWC coupling to join into the liner at field determined locations. Since the pipes may be joined anywhere along the entire OD using the FWC coupling, predetermined manhole positioning or specially marked pipes are not typically required with Hobas, nor were they required on this job.
Numerous Benefits
Hobas pipes provide benefits to owners including leak-free joints due to the tight sealing FWC couplings and a long design life due to the superior corrosion resistance. Installers, such as Trainor, often recognize the cost saving advantages of utilizing Hobas including the lightweight joint sections and field versatility. This was the first Hobas installation for both Denver Metro and Trainor Construction. We are confident that they will be pleased with the long-term performance of Hobas pipes and look forward to future installations.
Find Your Sales Rep 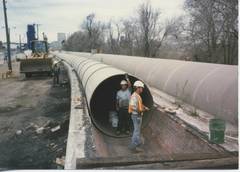