The population of Utah has been growing recently and this trend is projected to continue well into the future. More than 20 million people visit the popular ski resorts to enjoy what the state’s license plates describe as the “Greatest Snow On Earth.” But the local population is growing along with tourism, so local municipalities are taking a closer look at their current infrastructures.

The South Valley Sewer District (SVSD), which includes approximately the southern third of Salt Lake County, serves Bluffdale, Copperton, Draper, Herriman, Riverton, South Jordan and South Sandy. It is investing roughly $3 million in its infrastructure. District municipalities reportedly include more than 4,400 building lots that are not yet connected to the existing system. These lots will require more than 1½ million gallons per day (mgd) of additional capacity. The district has been experiencing rapid growth over the last several years, stressing its existing facilities.

To handle the growing loads in southern Salt Lake County, relief lines and new facilities, including a wastewater treatment plant, are being designed and constructed. Since March 2002, SVSD officials have been seeking approval for an ultra-filtration treatment plant to be located in Riverton that will enable them to keep pace and provide enough capacity for the next 10 to 15 years.

When it’s completed, the Riverton facility will add 15 mgd to the district’s treatment capacity, with potential for more upon future expansion. The sewer district will keep its 13.2 mgd at the existing South Valley Water Reclamation Facility (SVWRF), which is currently under expansion. When the SVWRF plant expansion is complete, the SVSD will acquire an additional three mgd.

Additional piping networks are necessary to insure that sewage can be transported to the existing treatment facility until the new plant is complete. One of the most recent projects was the Jordan River Outfall Sewer. This new line’s primary purpose was to mitigate the capacity problems with the existing 48-inch line that has been in operation since the early 1980s. “The (Jordan River) project included approximately 4,000 feet of 48-inch Hobas pipe and 16 seven-foot manholes. It is one of the district’s main outfall lines to the treatment facility,” explained Michael H. Foerster, P.E., district engineer with SVSD.

Bowen, Collins & Associates of Draper, Utah, that specializes in providing water, wastewater, storm water, groundwater, civil engineering and environmental services to clients in the Intermountain West, was hired to design the outfall. Allied Construction and Development, Inc. of Logan was awarded the bid to install the pipe.

Both direct bury and boring were included in the installation. Hobas centrifugally cast, fiberglass-reinforced, polymer mortar (CCFRPM) pipe was specified. “The use of Hobas pipe on this particular project was determined and required by the South Valley Sewer District. We had installed 24-inch Hobas pipe on another project about 1½ years earlier for Cottonwood Improvement District in Cottonwood Heights, Utah. The Jordan River Project was mostly direct bury with several installations of Hobas through steel casings. On both occasions the pipe installed well and had no problems with visible deflection and joint leakage,” said Bart LaMont, project manager, Allied Construction and Development.

The direct bury portion of the project ranged from 15 to 30 feet in depth and was installed primarily through good, clean, sandy material. The embedment specified and utilized was one-inch minus stone with filter fabric to prevent migration of native soil into the embedment zone. “We worked with the Hobas engineering staff to help us specify the appropriate pipe stiffness rating based on depth and soil conditions. They also provided us the appropriate pipe zone backfill specification requirements for Hobas pipe,” stated Brent Packer, P.E., design engineer, Bowen, Collins & Associates.

“The goal of our staff is to provide sound engineering support on Hobas projects,” stated Rene Garcia, senior engineering associate with Hobas Pipe USA in Houston. “We are always willing to provide assistance to designers and installers to make their projects as successful as possible. But this customer support begins well before Hobas pipe is chosen for the project. During plant tours of the Hobas facility, engineers provide detailed explanations on flexible conduit theory, manufacturing capabilities and quality control as well as any concerns or questions related to specific installation.”

The Jordan River project required additional planning because of the extensive groundwater that was present. “The project is in an area of high ground water and has experienced some hydrogen sulfide (H2S) degradation of the existing concrete pipe and thus chose Hobas for its H2S resistance and water tightness,” said Foerster.

The pipe used in this project has an SN of 46, which is standard for direct bury and tunneling applications. This high stiffness allows for routine burying methods with predictable performance that can handle deep covers. “The Hobas pipe was easier to install than RCP and held rigidity better than the profile PVC piping that we have used in the past,” said LaMont.

Hobas push-together FWC couplings were utilized for the Jordan River project installation. The couplings were factory assembled to one end of each pipe for ease of use in the field. The sealing design includes both lip and compression elements so the joint is suitable for both non-pressure and pressure service. “The Hobas joining method allowed for the bells and gaskets to remain clean because they were the first thing installed with each new stick of pipe.

“Allied Construction’s experience with the installation of Hobas pipe on both occasions was very positive from the pre-sales point through the shipping, installation and technical support areas. In our view, Hobas pipe has some very positive advantages over many of the other pipes of similar types,” said LaMont. 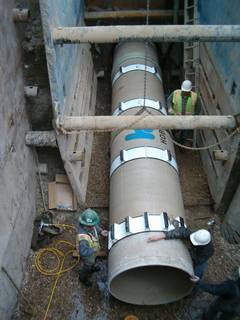 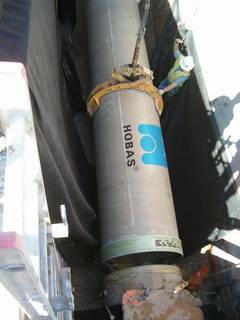 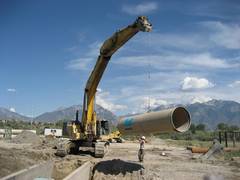