Opportunities often present themselves at the moment they are most welcome. This recently occurred for a sanitation district that was facing combined sewer overflows (CSOs) compliance issues in Northern Kentucky. Sanitation District No. 1 (SD1) serves the sanitary and storm sewer needs of Boone, Campbell and Kenton Counties near the picturesque Ohio River. SD1 was in the early planning stages for CSO control when a developer began the submission process for a residential development along the riverfront. This would add a large amount of fill material over SD1’s existing Ohio River Interceptor (ORI), the main interceptor for the combined sewer system. It would not be able to support the extra load.

“When these types of opportunities are identified during the plan review process, SD1 will work closely with the developer to determine feasibility, costs and final design plans,” said Peggy Casey, a Communications Department representative for the district . SD1 was able to work with the developer on a larger joint project that would not only attend to the current need, but help prepare SD1 for the future.

Larger Centrifugally Cast Fiberglass Reinforced Polymer Mortar (CCFRPM) Pipes
The proposed residential development plan included the cost of replacing existing 24- and 30-inch sewer lines with new pipes of the same diameter. SD1 evaluated the submission, as well as a range of CSO control alternatives and their respective long- and short-term benefits. They considered that the new residential development would make future construction in this area virtually impossible.

After reviewing all of the information, SD1 decided that it would be best served by installing a much larger 84-inch diameter pipe instead of the originally planned smaller sewer lines. The larger pipe would be capable of handling current and future flows and providing adequate storage capacity. The decision to upsize the 8,000-foot line had several advantages, including economic incentives, since the developer would pay for a portion of the project.

Sean W. FitzGerald, P.E., senior associate with Hazen and Sawyer P.C. stated, “We provided hydraulic design calculations and assisted with the overall alternatives analysis to select the optimum pipe size and design for conveyance and inline storage. We also facilitated and assisted with the materials selection and did the design review. The selection to go with Hobas was done by SD1 and was based on the combination of several things which included: the water tightness of the gasket compared to other pipes, corrosion resistance, known quality, ease of installation, service, contractor preference and cost.”

The director of planning and design for SD1, Brandon C. Vatter, P.E., said, “The final design of the sewer replacement also included new diversion structures that will prevent significant grit accumulation, capture solids and floatables and prevent the intrusion of Ohio River water back into the sewer system during flood events.” The new sewer provides both conveyance and inline storage leading to a 56 million gallon reduction in annual CSO volume to the Ohio River.

The designers had a host of challenges to address, including evaluating the interceptor for two very different installation conditions. The first involved the initial 10 feet of cover along the river’s edge under pre-fill conditions and the possible floatation of the pipe in the soil of the Ohio River floodplain.

The second condition involved the placement of final fills, where more than 35 feet of additional soil would be installed over the pipe and where the pipe would be subject to the 100-year flood level of the Ohio River. In the event of a 100-year flood, the pipe would be exposed to in excess of 30 feet of external water pressure. To ensure that the water pressure would not be an issue, Hobas Pipe USA supplied an FWC coupling joint for this project. “This joint is capable of providing leak-free service in this type of application. Hobas FWC couplings are routinely used in high groundwater situations and can withstand internal pressures up to 250 psi and external pressures of over 100 psi,” said Cliff Henderson, area manager of the Hobas Ohio Valley Region.

Specials
In addition, the FWC couplings were utilized to join the many T-base manholes. Their design was complicated and included angles and connections to other materials. Due to the environmental impacts and the need to prevent groundwater infiltration, joint integrity was extremely important.

“This was the only joint we had full confidence in at the time this project was built,” stated Vatter.

Through careful planning and evaluation, 8,000 feet of 84-inch Hobas pipe was installed on schedule during the driest months of the year. The installation of Hobas CCFRPM pipe was trouble-free and eliminated any concern of groundwater entering the line and corrosion of the sewer over the long-term.

“Overall, the installation of the pipe went well and Hobas was responsive in addressing any issues that came up,” commented FitzGerald. 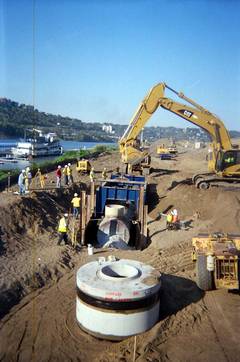 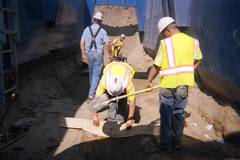 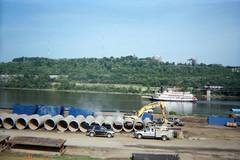